Description: Multitasking is an exciting way to add power to your iPad app. It is easy to enable your app to run two instances of your interface side-by-side, and your customers will love it. Learn how to take your existing features like drag and drop and use them to easily create a second window. Find out how supporting multiple windows changes the app lifecycle and what that means for all applications. Hear about some common mistakes and how to solve them, setting you and your customers up for a fantastic experience.

Supporting multiple windows will make your iPad app much friendlier to macOS once you cross that bridge with Catalyst.

How to create new windows?

Never force the user to use multiple window, make sure the user understands how to do whatever they need in the current window, and, alternatively, give an option to “Open in New Window”.

Behind The Scenes: UI Hierarchy 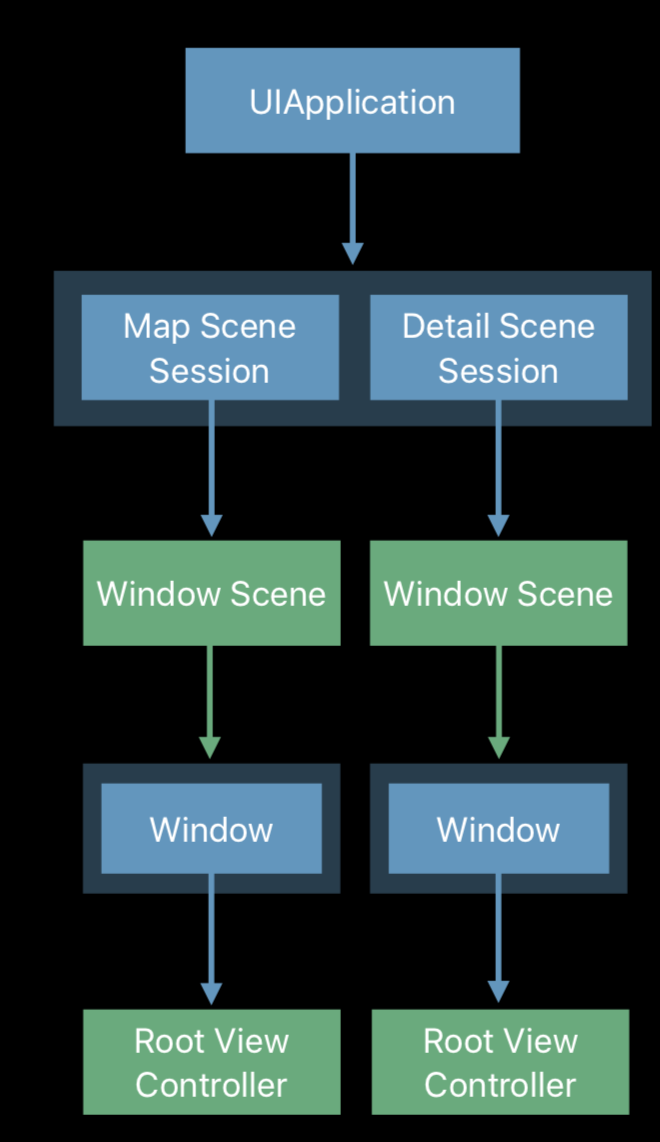 A UIScene contains the UI and is created/destroyed by the system. A UIScene is aware of other scenes, every single scene is actually a UISceneSession.

A UISceneSession is the persisted interface state. The UI itself can be created/destroyed by the system, however the UISceneSession remains as long as the app itself is killed, the scene kills itself, or the user closes the scene.

Each scene has a defined system role:
apparently, this is to say where the scene is. On the main device or in an external display.

Every time a new window is created/destroyed, your application is informed via the app delegate that a new session had been made/destroyed.

Since now we have multiple windows, many events that previously were delivered to the application delegate have been transferred to the scene delegate. (like for UIApplication, we normally don’t subclass the UIApplication but we implement a UIApplicationDelegate. In this we have a UISceneDelegate, which is a protocol that we implement ourselves in a custom UIResponder class). 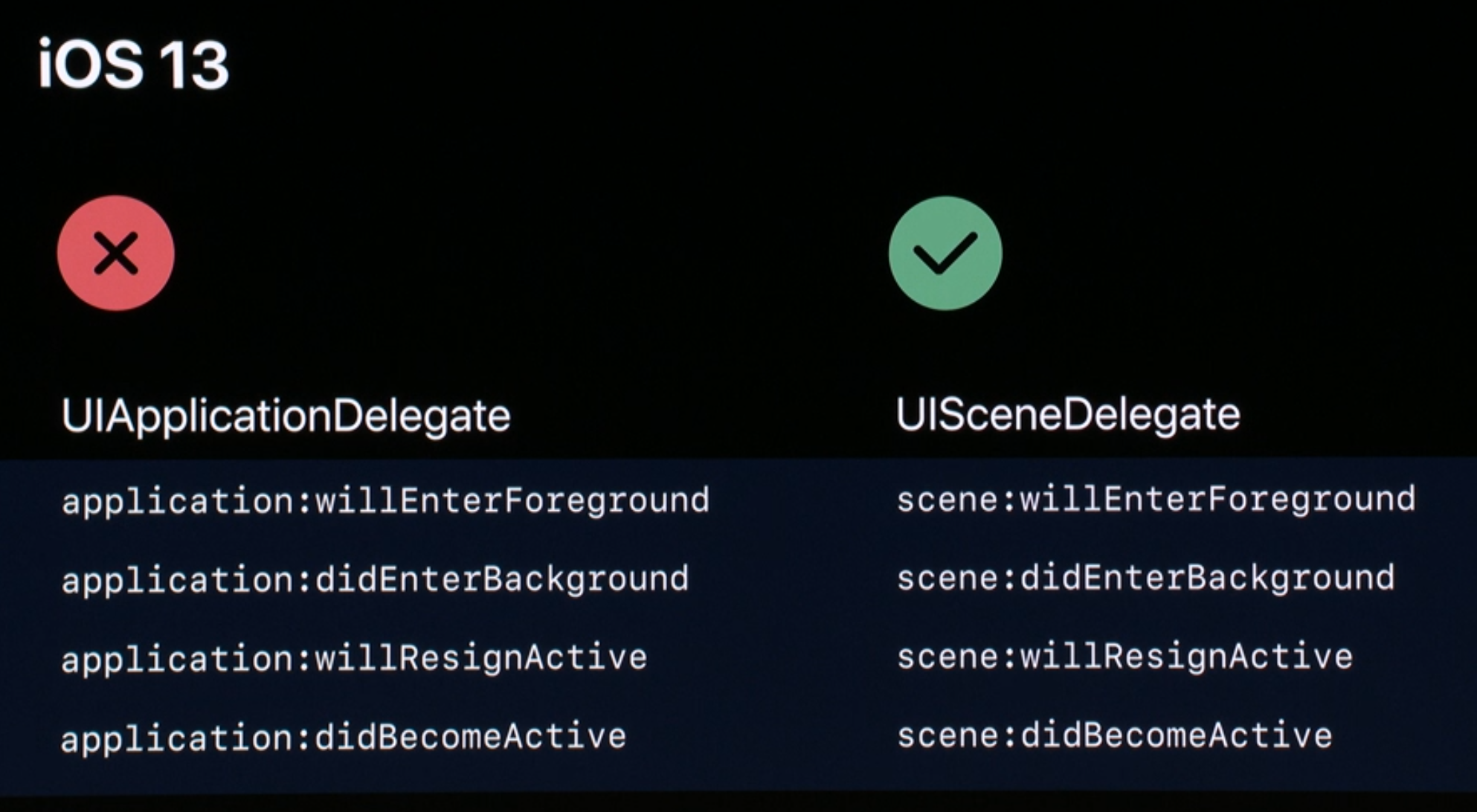 Also other things like the status bar state are now to be asked to the scene, not the application. Basically everything UI-related is on the scene. 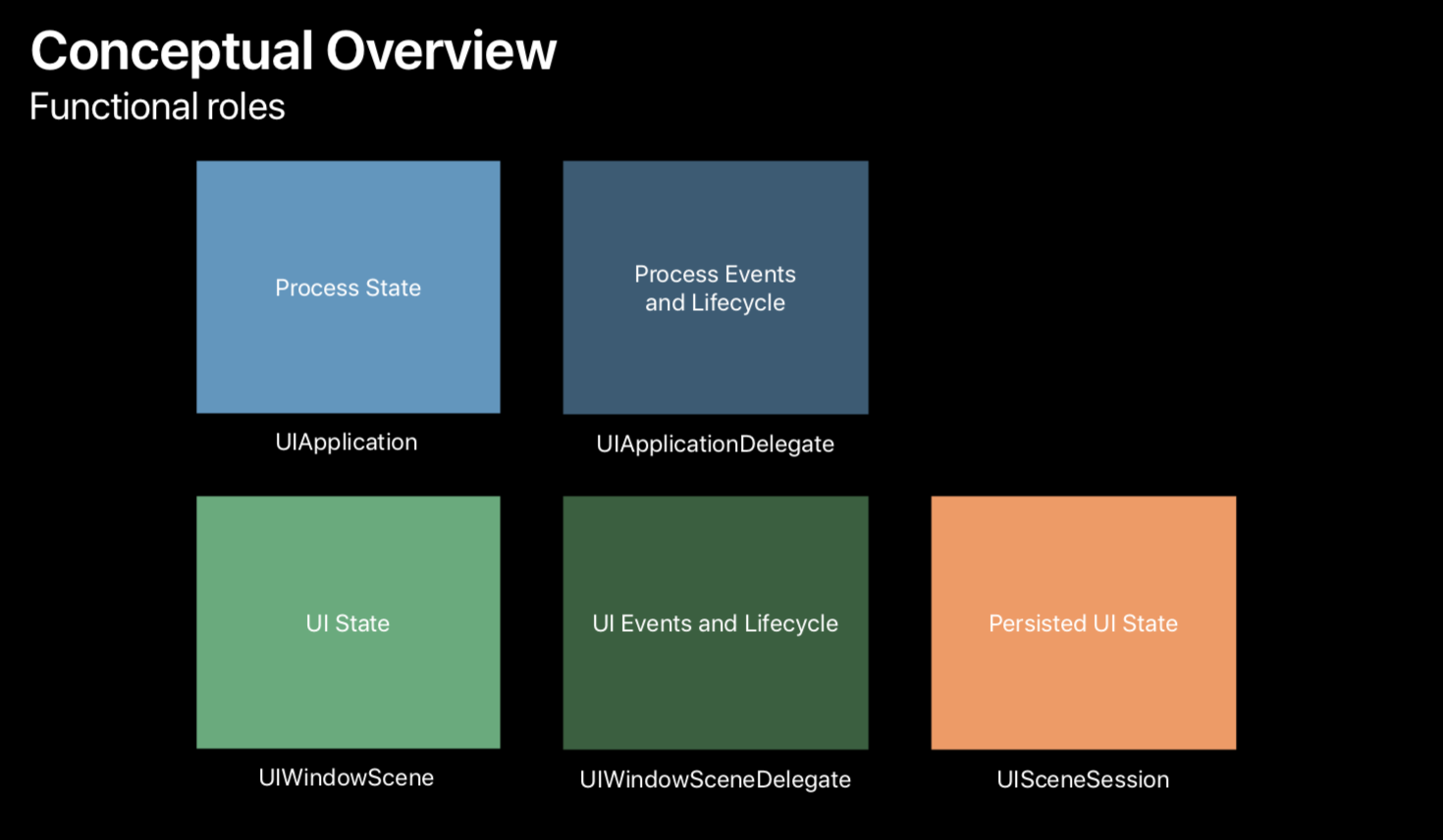 First things first, we must enable multi windows support in the project:

This updates the app info.plist manifest with a new key/value telling the system about window support.

Once this is done, it’s time to declare the different supported scenes, which can be done statically by adding different Scene Configurations in the info.plist.

This can also be done via code.

Create new scenes (note that this and the following are called in UIApplication):

Once called, a new Scene session is created. However, iOS still doesn’t know what configuration you’d like to use in your new scene, which is why iOS lets you specify so by calling the app delegate configurationForSession: method.

In this method we will get the user activity that we passed in the requestSceneSessionActivation call, which then we can use to inspect and decide which configuration to return.

This method is also called on the first launch of the app as well, to let the app decide with what configuration we should fill in the first session.

...you want to call the scene with.

You can declare these configurations dynamically in code or statically via info.plist.

If you use define them in the info plist, all you have to do in this method is decide which configuration to call and return it by explicitly saying the name of that config:

This is because all the above is already declared in the info.plist (if you’ve chosen that route).

If the configuration declares a storyboard, then everything else will be done automatically.

The new scene delegate will receive a sceneWillConnectToSession: call with, again, the same UserActivity passed in order to restore the session.

Note how in willConnect we need to setup the window ourselves:

When the scene gets disconnected, it means that the system simply killed the scene (“claim back the resources”), before doing that, the scene delegate gets a last call sceneDidDisconnect:

In this method we should free any resource that was active because of this scene but was held somewhere else in the app. Don’t delete user data, as the scene might connect again in the future.

If the scene is destroyed (because the user swiped up from the app switcher or else) then the UIApplication delegate will be called and then, and only then, it is ok to delete the scene user data.

This might be needed when a shared resources has been updated and the change should be reflected in other scenes as well.

It is used by iOS to capture a new snapshot of the scene (displayed in the app switcher).

Used to close the given scene (note how this is, again, called on UIApplication)

The options let us specify an animation for the given scene destruction, this is cool to display the user what has happened to the scene data for example) .

Animation happens if the scene is in the foreground.

Choose Which Scene to Activate: UISceneActivationConditions

Let’s say that we receive a notification and the user taps on it. Which scene should the system choose to handle the notification?

UIScene come with a UISceneActivationConditions object that tells the system what the specific scene capabilities are.

The CAN predicate tells the system what kind of content the scene can display.

The PREFER predicate tells what content the scene prefers and at which level, so to choose between different available scenes.

Both predicates work around the TargetContentIdentifier, which is a (string) structured way to represent data in your model (think of it as a link).

Going back to the notification example, the system will run this string to each available scene in order to determine which scene to use.

From iOS 13, if push notifications come with a “notification-content-id” key, iOS will use that as the TargetContentIdentifier.

Other places where this is used (and where we must declare it):