Description: GameplayKit provides a collection of essential tools and techniques used to implement gameplay logic. Get introduced to the GameplayKit framework and see how to put its capabilities to work in your own titles. Learn about managing state machines, controlling game entities, and implementing rule systems. Dive into its built-in tools for randomization, pathfinding, and advanced simulation.

GameplayKit is a high-level gameplay framework, it consists of a collection of common architectural patterns, data structures, and algorithms that enables our developers to make really great and compelling gameplay in their games.

Image we’re building a tower defense game:
we have multiple entities in our game, instead of them having functionality in an inheritance sense, e.g. being a mover, being a shooter, or being targetable, they instead have components, which encapsulate singular elements of our game logic.

Using components scales very well with complexity, you can have different people working in different components with no issue.

Every time we create a new entity, we can reuse components that we have already defined or create new ones.

If we need a finer control over the order or how your components update, we can use GKComponentSystem: this is a collection of components from different entities, but they're all the same class type.

For example, if we want the AI component to always update after the move component, we can set so via GKComponentSystem.

The components within a GKComponentSystem no longer update when their entities call update, it’s up to us to call update on the system instead.

Used to define the possible states of an entity, and also what transitions are possible from each state.

If we implement this manually, we might define a state as an enum with multiple cases, however managing each transition generates lots of boilerplate (big switch statements, deep if-else trees), and the more you use the pattern within the app, the more boilerplate we generate.

GKStateMachine is your general purpose finite state machine. It's always in one, and only one state at any given time. It possesses (and know) all the possible states.

We call enterState: on our state machines to cause a state transitions (this is also how we define the initial state of the machine): under the hood, it checks if that transition is valid, and if so, makes that change.

This is possible to control by overriding isValidNextState:

The state machine calls a number of call backs on the state objects.

These are autonomously moving entities, they're controlled by realistic behaviors and goals. They have a number of physical constraints, things like masks, acceleration, and inertia.

The idea is to make our entities more naturally: e.g. if our game entities move in straight lines and take sudden turns and bump into environment obstacles, it doesn't look very real/natural. Movement in the real world has things like inertia, and mass, and acceleration. These agents help us reaching reality in our games.

An example of usage of this feature is making a racing game and defining the other drivers as agents, where the behavior is the sum of three goals: following the path (1) while also avoid obstacles (2) and do it as fast as possible (3).

We can assign different weights to each goal, so that the final behavior changes based on the weight as well.

The session has a demo for Agents/Goals/behaviors where:

The demo always uses the same logic, but with different behavior. All movements are very natural from the ship just by using these components. 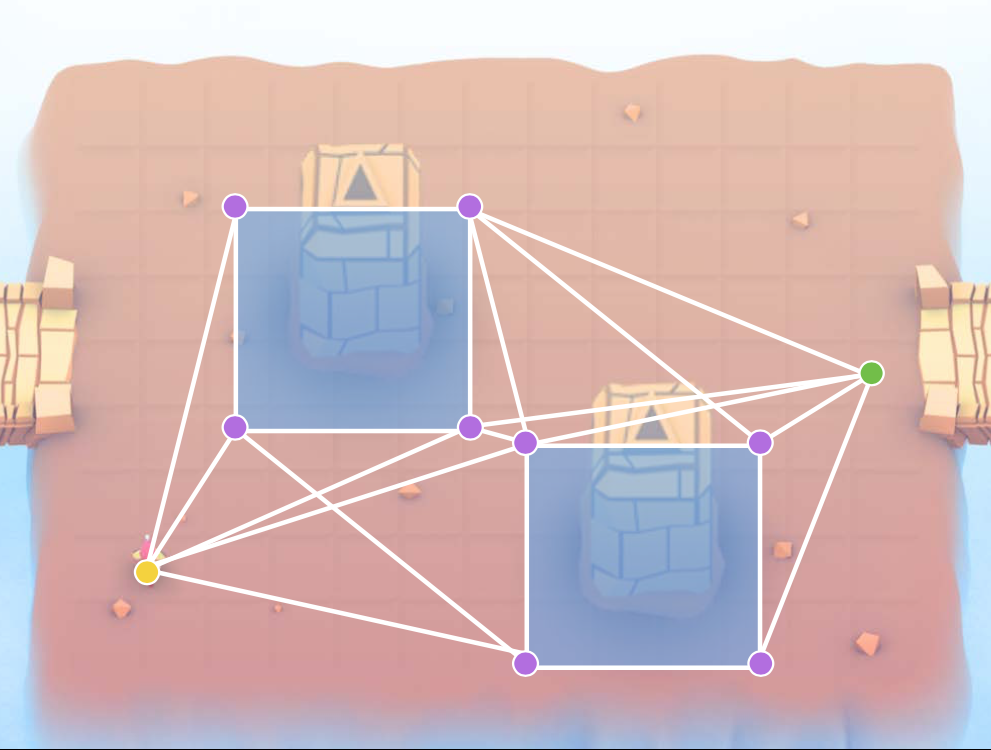 If we use SpringKit, we can easily generate obstacles from SKNode bounds, physics bodies, or textures

What MinMax AI does:

The great thing about MinMax is that it doesn't need to know any of the details of your game. You don't need to teach it your rules and it doesn't need to know how it's implemented. This is all abstracted away. All you have to do is provide a list of players in the game, the possible moves they can make, and a score for each player that indicates the relative strength of their current position.

When you request a move from the AI, it takes all this data into account and it builds a decision tree, and returns the optimal move for you to use.

There are three key protocols that you're going to need to implement to work with the MinMax AI.

A game consists of three elements: